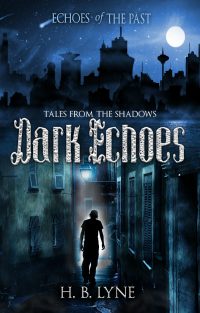 Dark Echoes: Tales from the Shadows

In the darkest shadows, the deepest memories lurk. Hidden mysteries leave their mark and result in disturbing Echoes of the Past.

Whether you’re new to Echoes of the Past, or a devoted fan already, this collection by H.B. Lyne will take you deep into the dark lives of some of the city of Caerton’s most enigmatic shifters. This collection of short stories chronicles events 10 and 5 years prior to the novels; as well as hidden events in the novels themselves.

Plunge into the past of the mysterious Father Ash, the outcast shifter in his white house high on the hill. How did he come to be exiled from Caerton? Who did he leave behind? Uncover the events surrounding his infamous exile in From the Ashes.

The Blue Moon took in four young strays after decades living alone. Before Ariana and her fellow cubs arrived, Fortune led his small pack into some of the darkest pits of the city. Lift the veil on what life was like for them before their war with The Witches, in this exclusive short story, Dark Echoes.

The final tale shows us the fate of the city’s last pack on the coast, The Storm Riders. Follow new father, Fire Talon, as he battles his personal demons and confronts monstrous creatures from the deep. Their watch is ending in The Storm Riders’ Vigil.

GET MY FREE COPY OF DARK ECHOES!